My time in Haiti was spent exploring Port-au-Prince and Pétionville during the intense period of presidential elections. It was Friday 6 November 2015 and the votes were now counted. It had been nearly two weeks since the Haitians went to the polling stations to pick their favourite candidate among an impressive line-up of 54 contenders: 50 were men, and just four were women. For Haiti, the mainly peaceful first-round election came as a relief, as previous elections in the country have been marred with violence. For me, it was bad timing. It was the day before departure and an email from a Haitian tour operator I had contacted landed in my inbox. The email advised me not to travel to Haiti because of threats to security following protests that can turn violent.

The demonstrations were in response to the announcement of the first-round of election results. Fortunately the protests were announced in advance, which meant locals and expats were able to steer clear. Most took place in Delmas, downtown Port-au-Prince, and occasionally outside of Haiti’s Electoral Council (CEP), which is located in Pétionville, a wealthy suburb of Port-au-Prince. 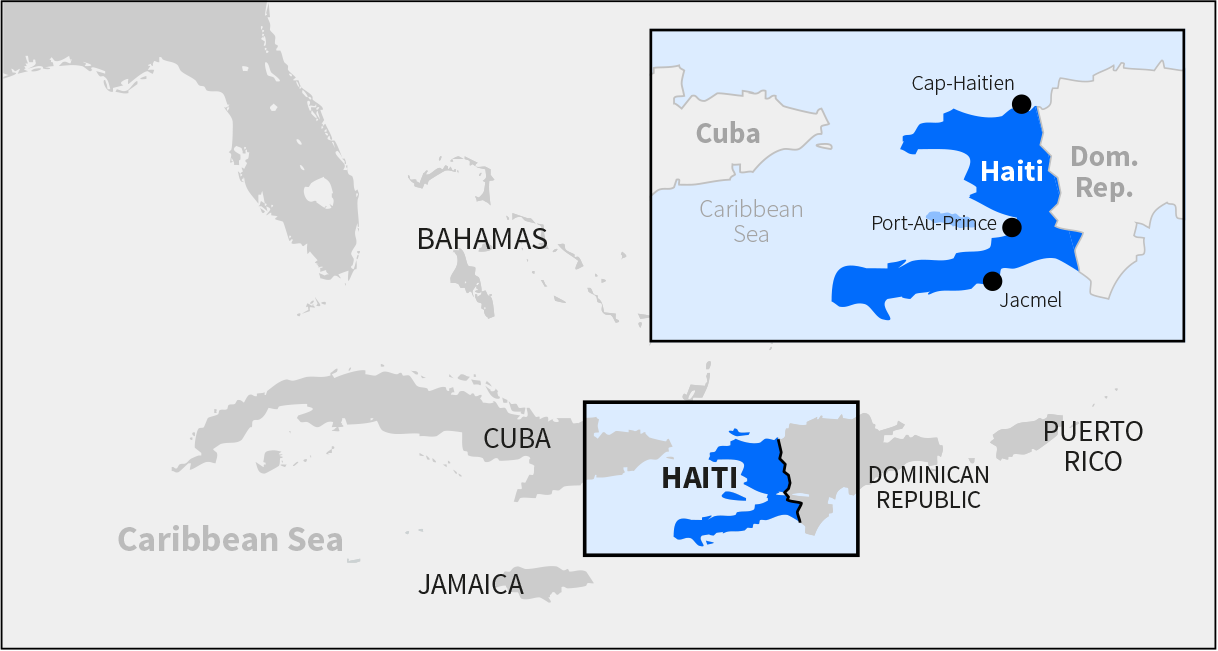 It is estimated that around 300,000 people live in Pétionville. Gated Pétionville neighbourhoods surrounded by razor wire and armed guards occupy the lush green hills of the East. The ostentatious mansions serve as a reminder of the stark divide between rich and poor. The community resembles a Haitian version of Beverly Hills, but instead of being occupied by Taylor Swift and Julia Roberts, the affluent residents are wealthy Haitians, United Nations employees and NGO workers. Following the 2010 earthquake, which killed over a quarter of a million people, the UNs presence increased in Haiti. UN trucks line the streets, and workers wearing bulletproof vests can be spotted in the crowds. 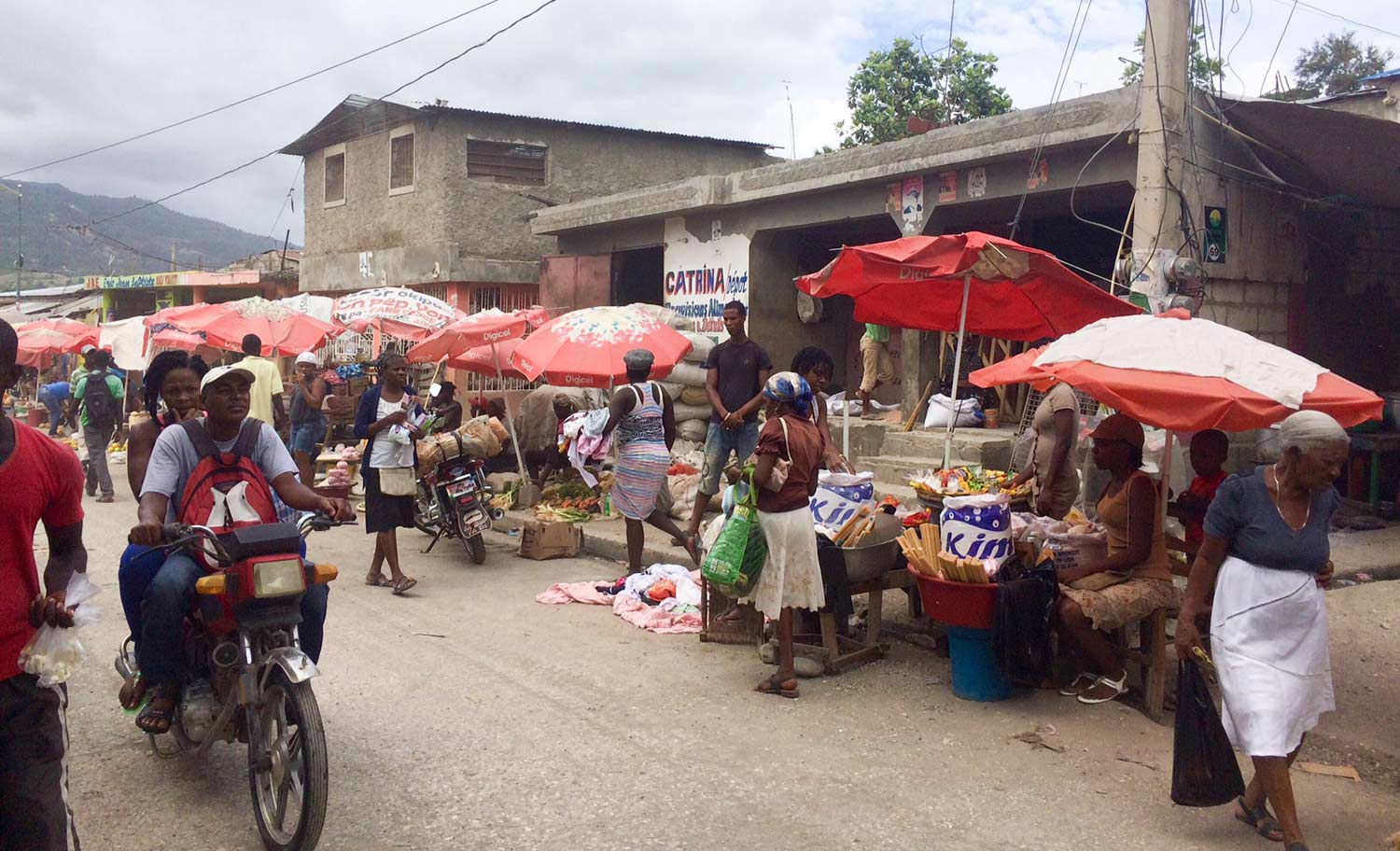 During intense political protests, residents in Pétionville were generally more cautious and stayed indoors. Gunshots could occasionally be heard in the distance during the evenings. A man was burned alive and his body was dumped on the streets of Pétionville. There were sensational and terrifying rumours, one of which was rapists going into private homes, but there was no evidence to confirm this.

While walking around the neighbourhood in temperatures reaching 30°C I chatted to friendly locals who commute into Pétionville daily to find the odd paying job. More than two-thirds of the labour force do not have formal jobs. Despite high rates of unemployment, Haitians work hard to generate a source of income, selling produce on the streets or offering themselves as travel guides. Although the literacy rate in Haiti is only 60%, the locals that I met spoke three languages fluently: English, French and Creole. Haitian Creole, a French-based language, is the mother tongue of most Haitians. They explained they learnt languages through listening and speaking to people rather than from attending school.

Locals discussed Haitian politics with an incensed passion. They raged about the political corruption at a time of desperate economic need in the face of poverty. Their main concerns were the high rate of unemployment and poverty. One man told me that he has never had a job because there are so few available; instead he makes ends meet by offering his services to tourists and selling produce on the streets. 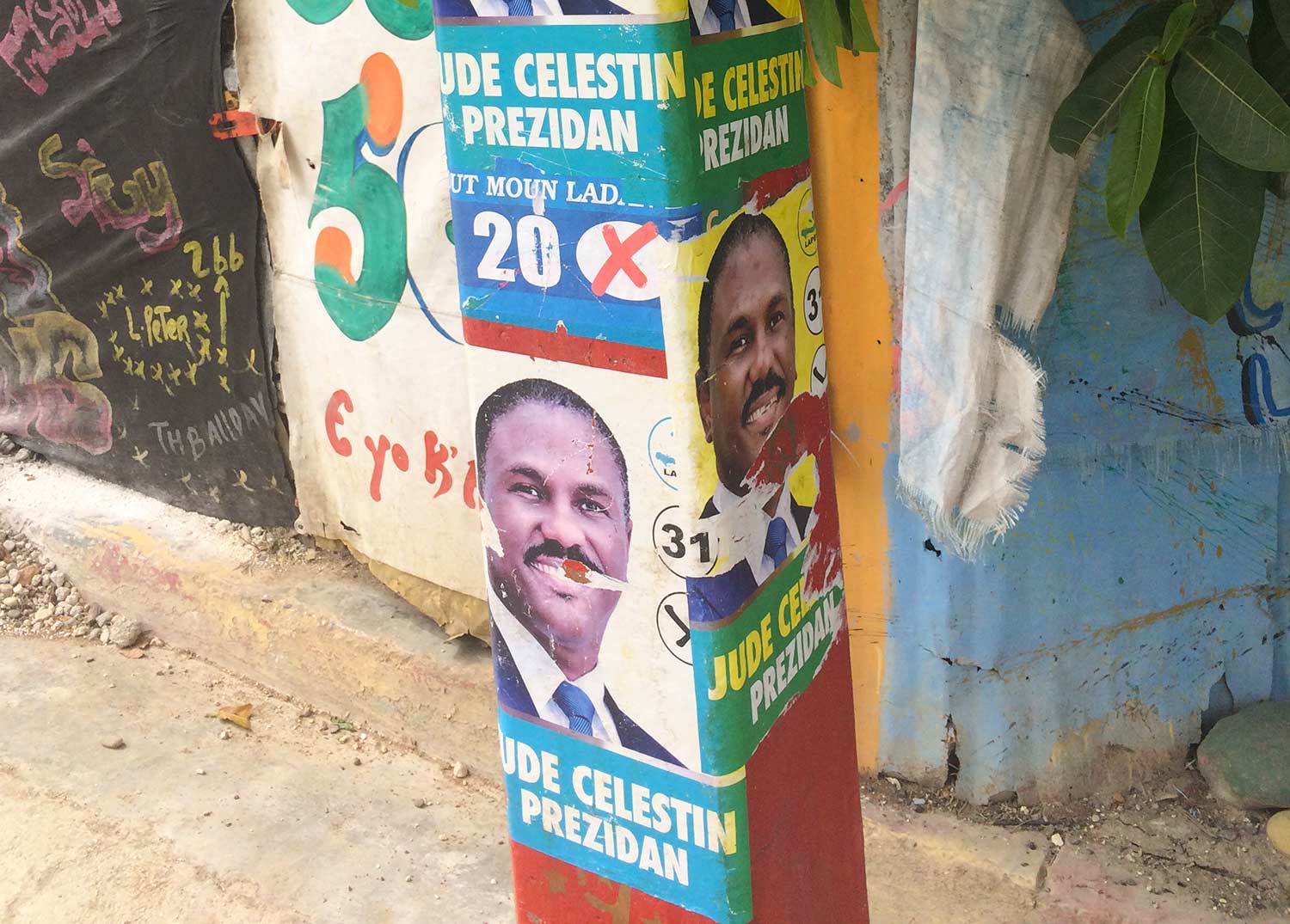 It was hard to forget that there were ongoing elections. Plastered on every lamp post, billboard, and building or shack were posters of the presidential candidates, all 54 of them. The leader of the party is very much the focal point of the posters. It was difficult to know what party the candidates are standing for because only the candidate’s face features on the election material. People cast their votes in public buildings, such as schools. They are given a large paper with the name and picture of all of the candidates (so that the illiterate can recognise their preferred candidate). They simply mark their chosen candidate.

Locals described their disappointment in the presidential candidates that serve their own interests rather than the interests of Haitians. Locals discussed whether they preferred Celestin or “banana man” as the future president. These two most popular contenders were battling it out for the top position. Celestin is a Swiss-educated engineer with a former career in construction. Moise is known as the “banana man”. He has a successful Haitian fruit business. Moise is associated with the former President, Michel Martelly, or Sweet Micky as everyone refers to him, and the “Haitian Bald Head Party”, named in honour of Sweet Mickey’s shiny head. Sweet Mickey was a popular and successful politician. He spun a celebrity, high-profile image, regularly indulging in lavish and opulent parties. In many respects, he shares similarities with Berlusconi. 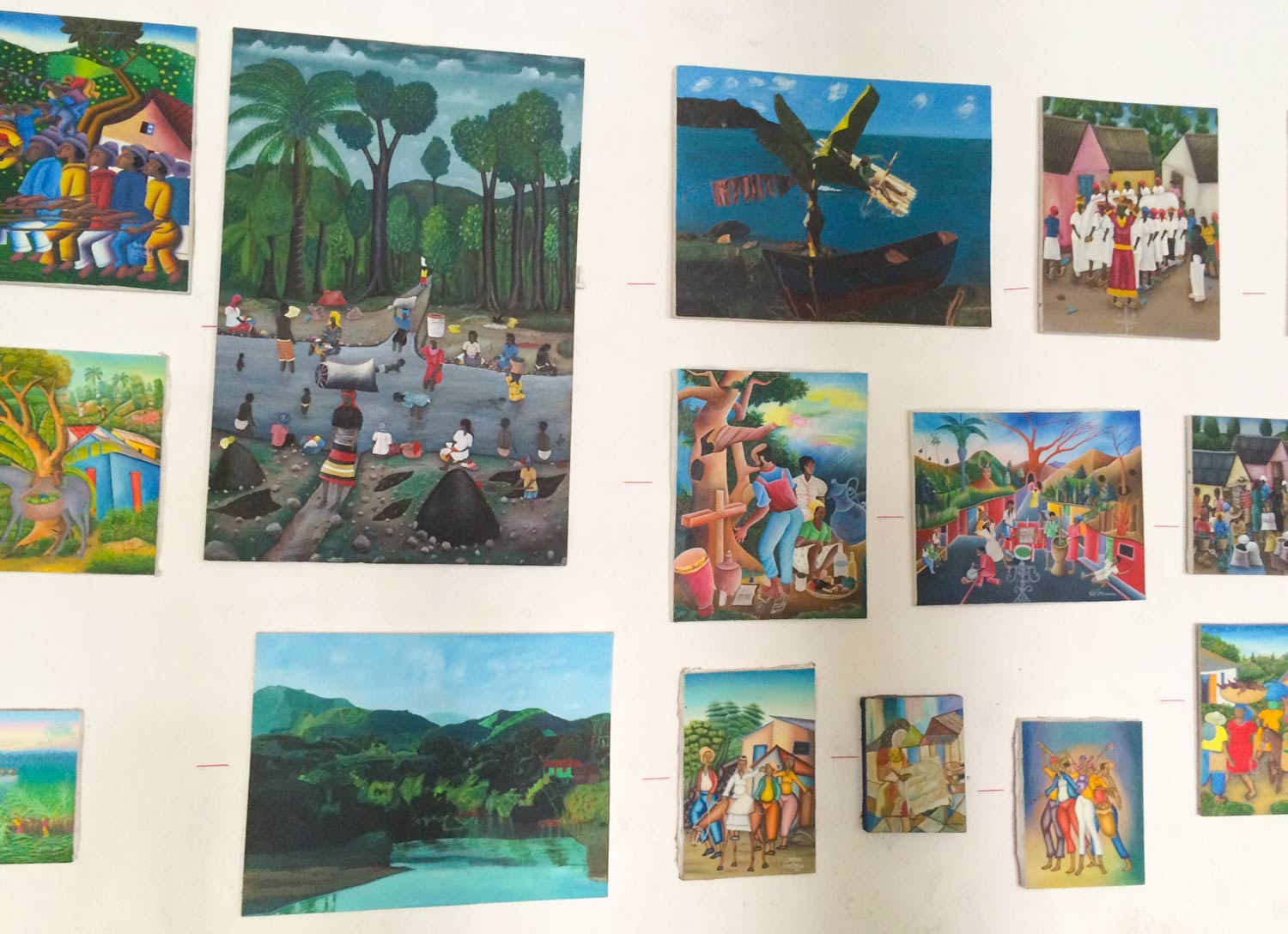 Pétionville is a bustling neighbourhood. It is home to many art galleries that feature Haitian artwork. They are free to enter. Colourful breathtaking paintings hung from the walls depicting scenes of daily life in the city, steep mountains, and bays of coastal towns. Among the scenes of Haitian culture and history were paintings of the devastating earthquake. Images of death and destruction invoked a somber atmosphere. Hanging from the ceilings and perched in windowsills were dolls that had been desecrated with black dye and had knives and forks protruding from the head and genitals.

Haitian voodoo is a religion that has deep historical and cultural origins in Haiti. Nearly everyone who practices voodoo also practices Christianity. In the same way churches have been erected in almost every town and city in the UK, voodoo temples occupy all Haitian towns and cities.

I stopped for lunch at Quartier Latin. The menu boasts delectable European and Haitian cuisine. After tasting the delicious Haitian food on offer, I lost all inhibitions to stick with safe sandwich options. While Haitian food might appear simple, for instance fish and rice, the fish was baked in garlic butter and peppers, and the rice was soaked in black mushroom sauce, a personal favourite of mine. Lunch was around $25.00.

Hotels mainly provide the evening entertainment in Pétionville. The hotels in the area are based on modern Western-style architecture, in part because they were rebuilt after the earthquake. It is hard to distinguish them from any Western hotel. The Karibe Hotel is a four-star establishment with an impressive rooftop bar, where affluent locals and expats from North America and Europe party side-by-side until silly o’clock. With immaculate ladies balancing on high heels and gentlemen smoking imported cigars, I felt as though I was in London’s SW1. The views from the rooftop bar were spectacular, and the European cuisine was to die for. A three-course meal is in the region of $40.00.

Over the next few days, I joined several tours with Voyages Lumiere, a highly-reputable tour company based in Haiti. The owner of the tour company, Jacqui Lebrom, is an extraordinary woman who is bursting with energy and wild tales of Haiti that spanned decades since she first arrived as a missionary. 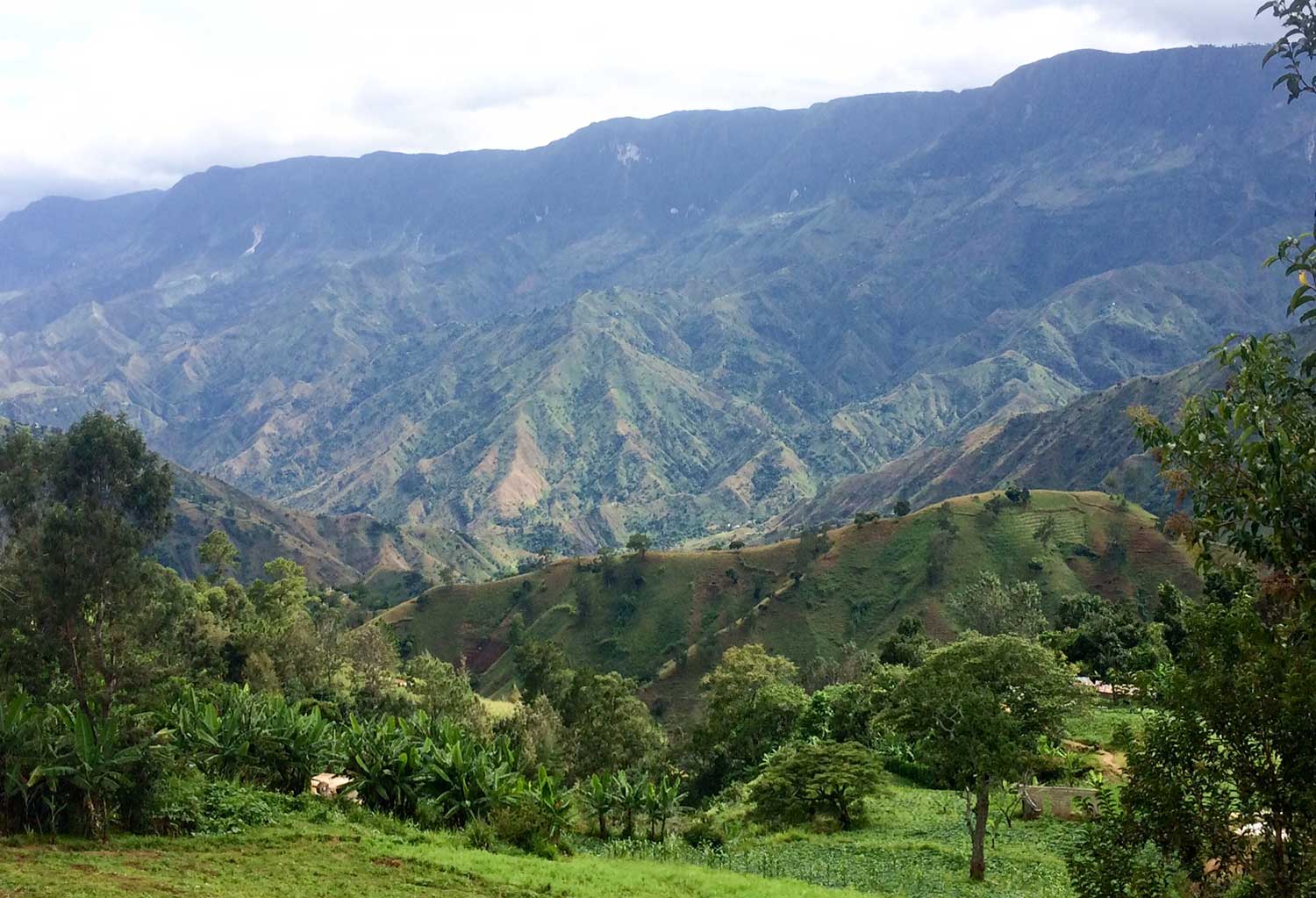 The tour of the Haitian mountains began with an adventurous drive up the steep hills, occasionally off-road. The first stop was at Boutilier Observatory, 969 meters above Port-au-Prince, offering magnificent views of the city, its bay and surrounding areas. We eventually arrived in a remote part of Kenscoff, a region located in the mountains. It is 10km to the southeast of the capital Port-au-Prince, at an altitude of 1500 meters. We hiked through the isolated mountainous areas of green landscape, lined with various shades of green and orange crops. 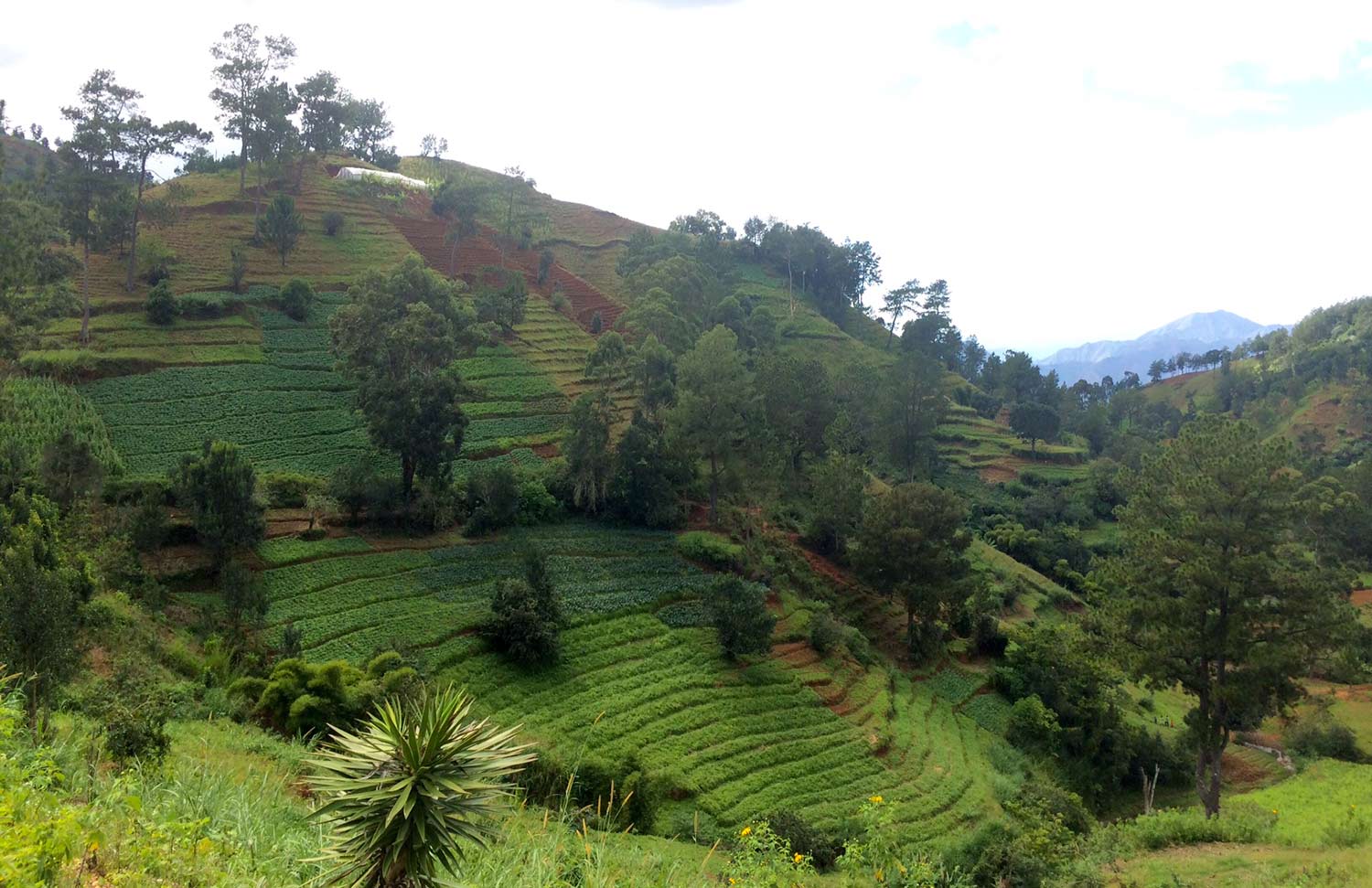 After a short hike, we ate lunch at Le Florville. Of all the restaurants I visited, I would rank this highest. With stunning mountain views, friendly service, and cuisine that combined Haitian and French influences, it was ideal.

A city tour of Port-au-Prince began with exploring the unique Haitian architecture which can be found in the “gingerbread” homes situated in the neighbourhoods outside of downtown. The timber structures, high-ceilings, delicate latticework, multiple porches and pastel colours resemble childhood dreams of gingerbread homes. Many of the ornate houses erected in the late nineteenth century survived the earthquake and are slowly undergoing cultural and economic restoration. While visiting a home currently undergoing extensive renovation, I met a former Haitian politician who also served as one of Haiti’s few women Prime Ministers.

Passing alongside the National Palace, the official residence of the President of Haiti, I was reminded of the ongoing elections. The faces of the 54 presidential candidates hung from the palace walls. The Palace is not open to the public, and still remains obliterated after the earthquake. We drove through the busy market, as opposed to walking through it because of fears of being ambushed. Crowds of people tapped on the windows of the vehicle asking for money or trying to sell goods.

The highpoint of my travels to Haiti was visiting Musée du Panthéon National Haïtien. It features an extensive history of slavery and the fight for independence from the grip of control of France. The pictures provide a harrowing portrayal of the servitude Haitian people experienced. It featured in remarkable detail the Haitain revolution of 1791-1804, which is considered the world’s largest and most successful slave rebellion. In 1791 the slaves began the rebellion and by 1804 they had ended slavery and French control over Haiti. The Republic of Haiti became the world’s first black republic.

My time in Haiti had soon come to an end. I flew out of Port-au-Prince and looked out across the vast coastal line and blue ocean. I reflected on my short stay and wished I were not leaving this tropical paradise.