Micronesia is the region of Oceana that mostly sits just above the equator. The other three – Australasia, Melanesia and Polynesia – are largely in the southern hemisphere and some of their little known islands comprise the famous if rather hazy “South Pacific”. By comparison, Micronesia is widely overlooked (as shown by the fact that the most recent guide book dates from 2006). 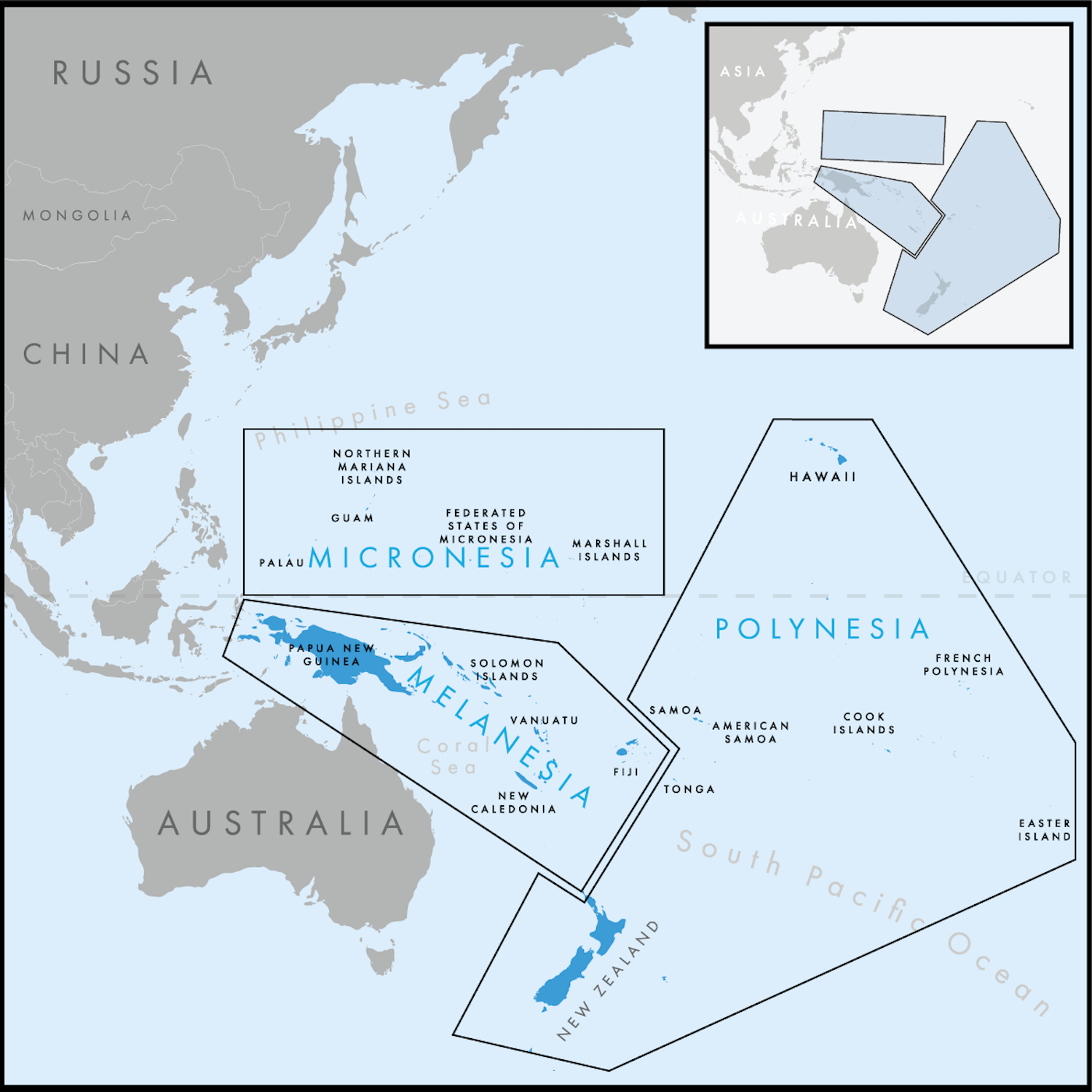 Yet there is a genuine tropical paradise to be found among the 2,000 tiny Pacific islands that stretch from the Republic of the Marshall Islands, 10,000 kilometres from the American mainland and more than 4,000km from Hawaii, through the Federated States of Micronesia to Palau in the east, with Guam and the Commonwealth of the Northern Mariana Islands in the north (plus Kiribati and Nauru in the southern hemisphere, though they are not covered in these reviews). 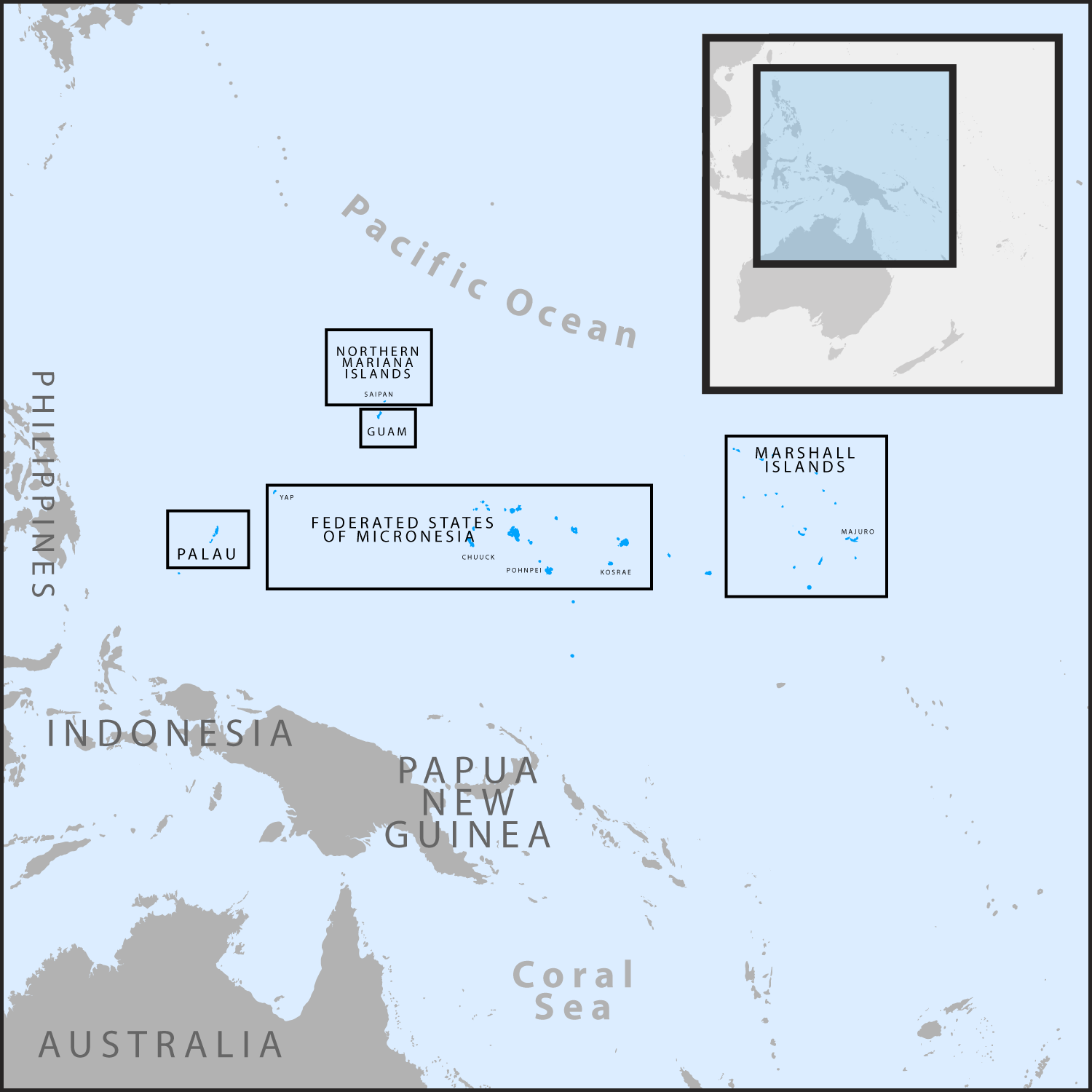 The majority of these islands were formed by volcanic eruptions. Corals have grown on the slopes of extinct volcanoes and as they gradually submerge back into the sea they have left gorgeous and pulsating reef systems, often forming islets that are part of atolls. 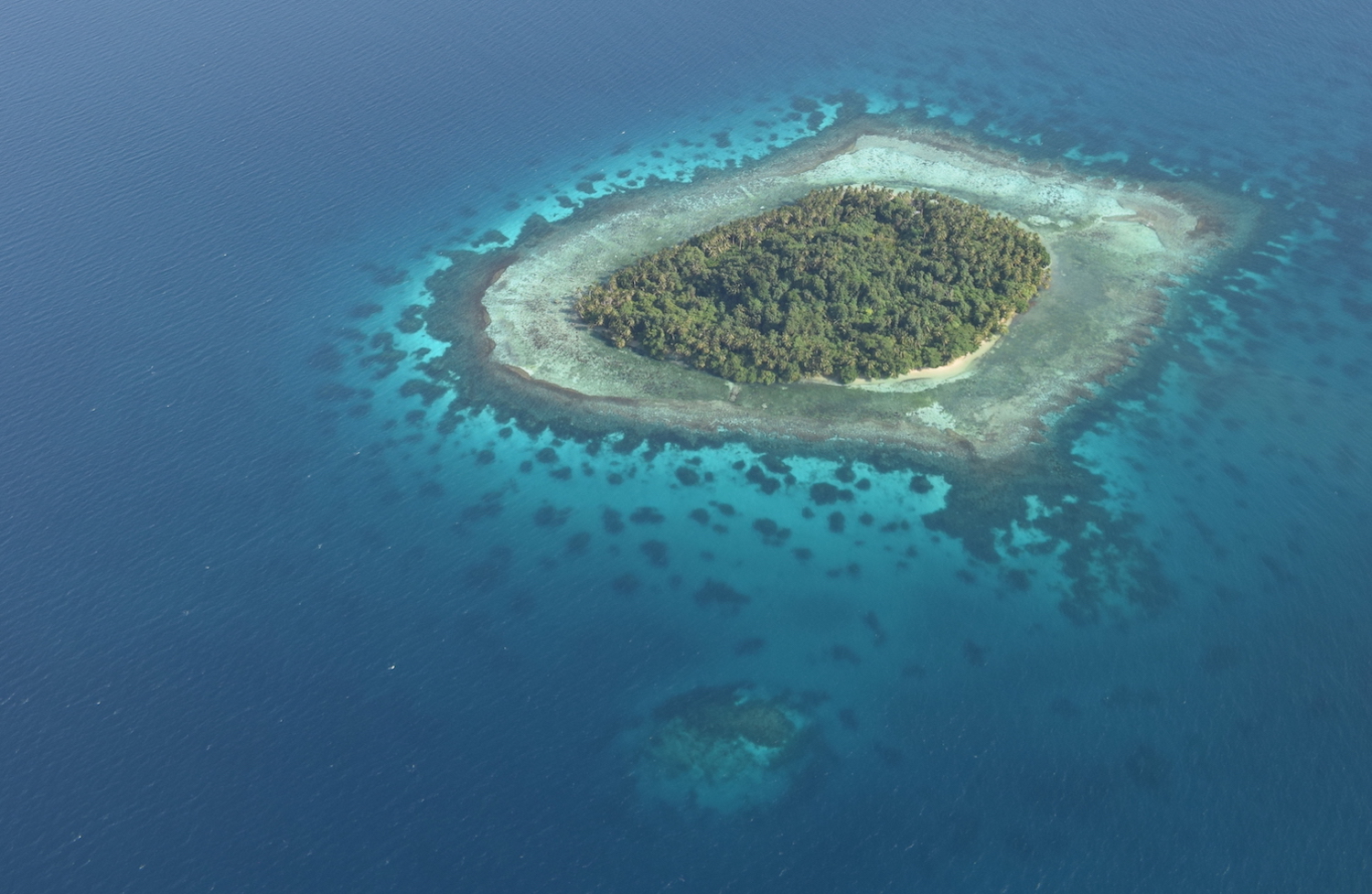 So it is not surprising that the few tourists who do come here tend to do so primarily for the world class scuba diving. Truk Lagoon, in Chuuk State in the FSM, claims to be home to the best wreck diving on earth, and with 52 Japanese warships, plus submarines and aircraft, many in shallow waters and all packed into a tiny area, plenty of experienced divers agree. Palau’s Blue Corner is always ranked by diving magazines in the top two or three sites on the planet, and Yap in the FSM has stunning topography as well as an abundance of manta rays.

The splendour is certainly not restricted to the water. The surface intervals are stunning too. In particular, Palau’s Rock Islands are a strong contender for the most beautiful place in the world. 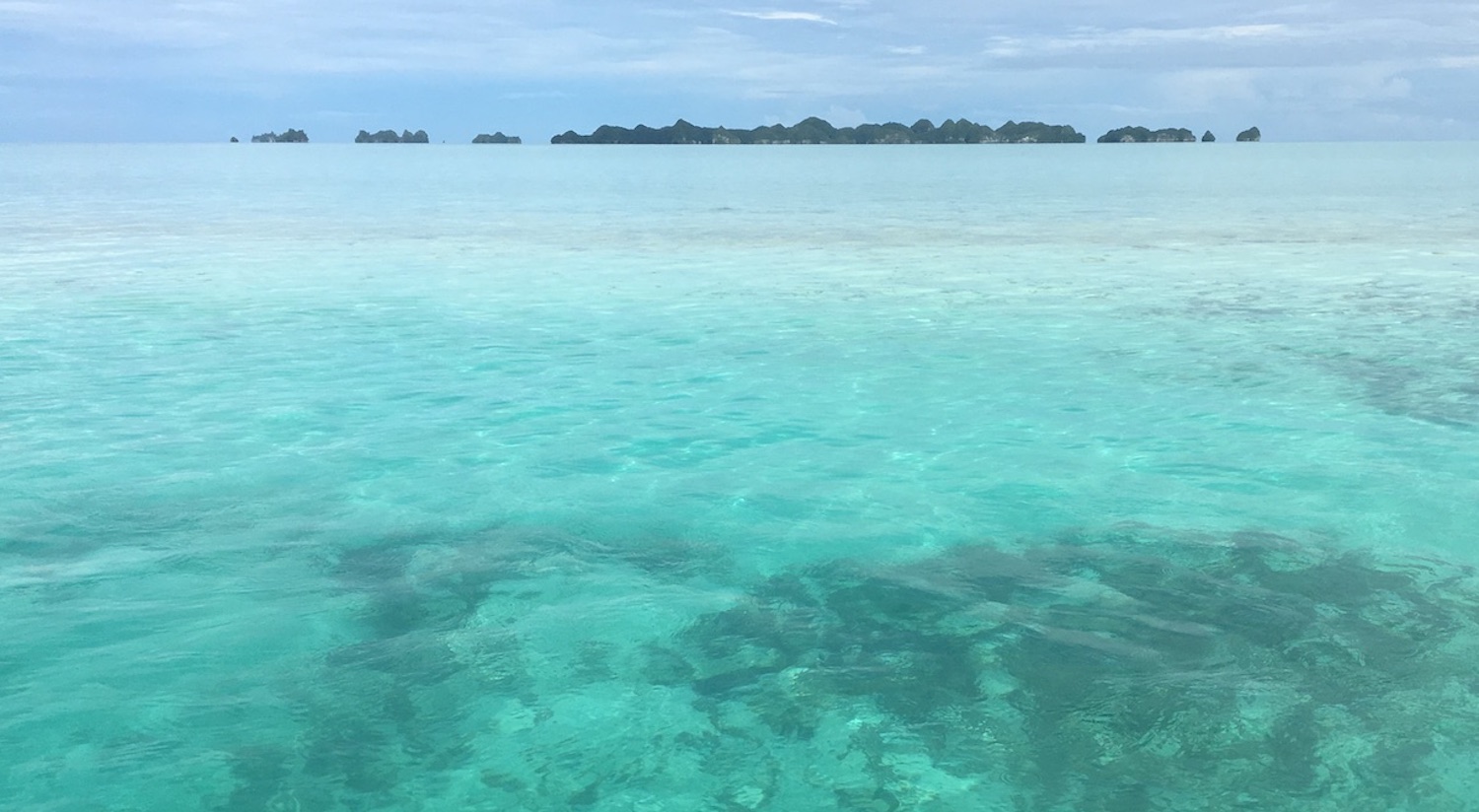 The atolls and islands are verdant and rich with mangroves, palms and many other exotic plants and trees. There are relatively few beaches, though there are gorgeous slivers of white sand in the undeveloped Marshall Islands; and there are urban strips of beach in front of high rise hotels in Guam and in Saipan in the Northern Mariana Islands, playgrounds principally for wealthy and fashionable young Asians.

The temperature across the region is very stable: it hovers around 27-30°C day and night, on the land and in the water, summer and winter, though the best time to come is between November and March when the winds drop and the rain falls least. That said, whenever you come you will get a lot of weather: as the old maxim here goes, if you don’t like it, wait 15 minutes because then it will be different. For the brightest blue sky can quickly deliver a tropical downpour just as dark clouds can suddenly disappear. This is a land truly at the end of a rainbow. 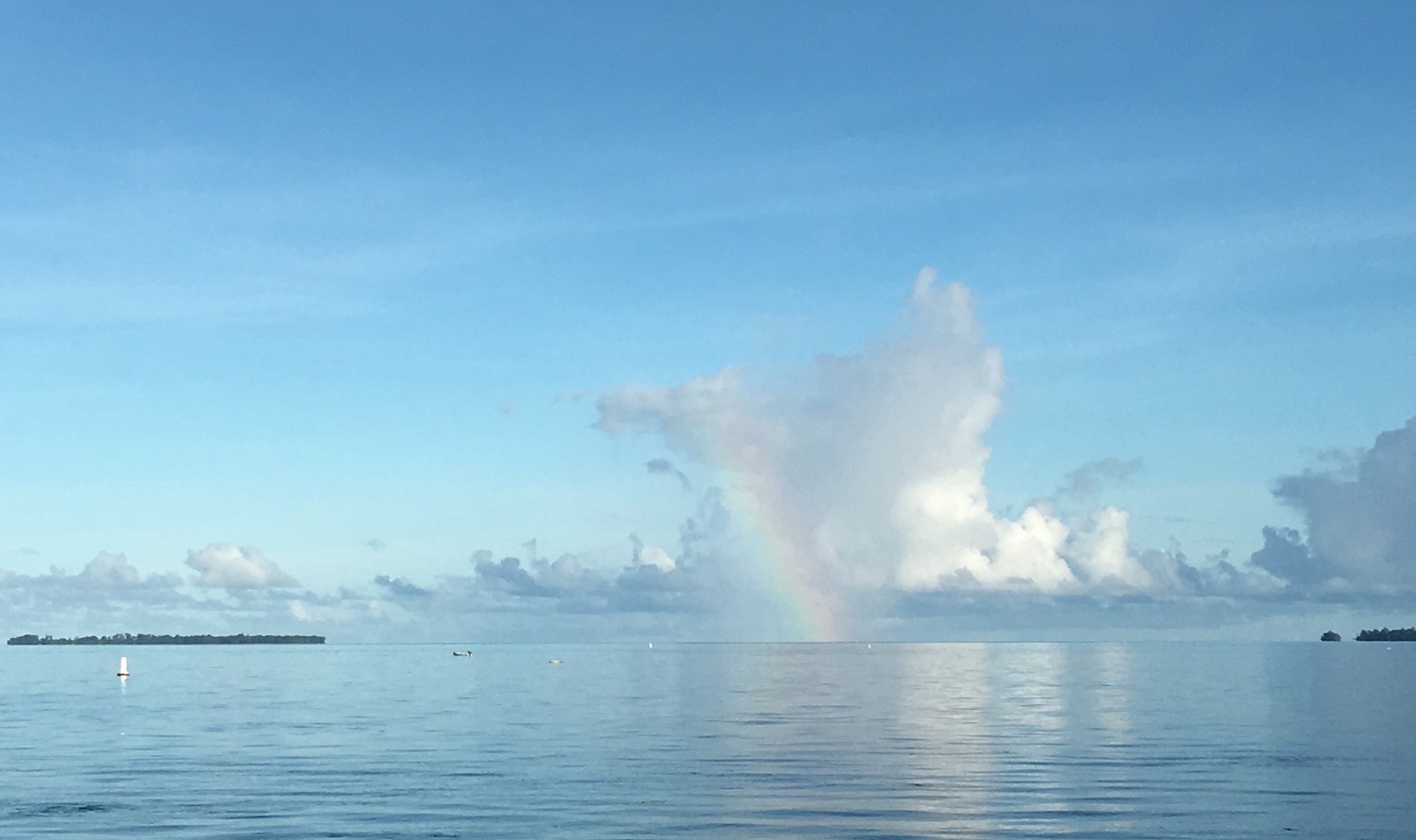 Typhoons are not that common in Micronesia, apart from Guam and the Northern Mariana Islands, though you will see lots of signs all over about tsunamis, pointing you along evacuation routes to safe areas.

Almost everywhere here still has a subsistence way of life, mostly from fishing, and several especially remote places, most obviously Yap, maintain ancient traditions that can make it feel like not much has changed in hundreds of years. The two most important archaeological sites of Micronesia are in the FSM: the remains of Leluh in Kosrae and the fabulously haunting Nan Madol in Ponhpei. 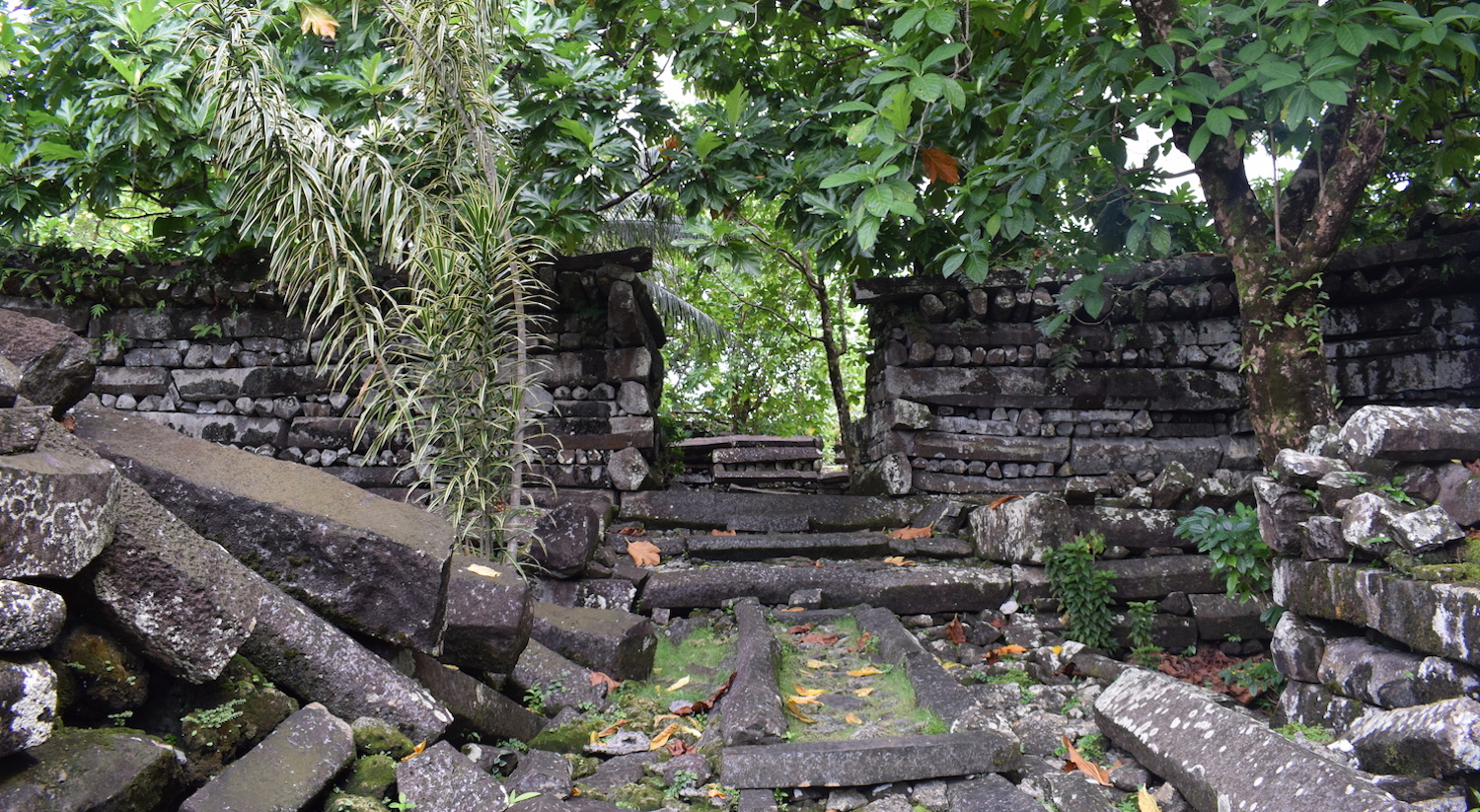 Micronesia was a crucial theatre in the Second World War, a strategic power base for the Japanese Empire until defeated in bloody conflict by United States forces. These battle scars are particularly visible at Chuuk and Yap, on Peleliu in Palau, and on Tinian in the Northern Mariana Islands, where you can also see the ghoulish loading bays and runways that massive American planes used before dropping nuclear bombs on Hiroshima and Nagasaki.

The countries of Micronesia are still pawns in the international diplomatic game today. After World War Two, the whole area was designated a Trust Territory administered by the US. Sovereignty was won by the FSM and the Marshall Islands in 1986, and by Palau in 1994, though they all remain in what is called a Compact of Free Association with the US: America provides some financial support in return for overseeing their immigration services and maintaining the right to use their countries as military bases. As proof of this subservience, these were three (plus Nauru) of the just eight votes that Donald Trump won at the United Nations in 2017 for his toxic decision to nominate Jerusalem the capital of Israel.

The Mariana Islands were split in 1898 when the Spanish colonialists lost Guam to the US and what became the Northern Mariana Islands to Germany; there are no southern ones, the distinction is with Guam to the south. Having then suffered Japanese occupation until 1944 – it is here that fabled Japanese fighters were still hiding out into the 1970s – these two are still not independent countries. They are in political union with the US, under American jurisdiction but with no democratic rights.

These days, Guam is the main US military base in the region, with 4,000 armed forces stationed on what they call this “permanent aircraft carrier”. For that reason it has been singled out as the principal target for North Korea, with Kim Jong Un claiming that the DPRK now has the ability to deliver a nuclear missile the 2,000km to reach here. Therefore, the island is in effect the frontline in the new cold war in the Pacific.

Americans are not the only ones with an interest here. Although Japan’s involvement is limited to tourism and the occasional war memorial, China has been asserting its soft power by funding various infrastructure projects and by rapidly expanding its tourism in dedicated hotels and casinos (though they are not much welcomed since most of the money spent there is channelled back to agencies in China rather than boosting the local economies).

American imperialism has meant not just marines, fast food and shopping malls. Everyone in Micronesia speaks English as well as their local language and all countries use the US$ as their currency. Despite this, people across the region have a strong bond as Micronesians, and as Pacific islanders.

The culture is therefore a fusion of American, particularly Hawaiian, and Asian, especially Japanese, on top of local idiosyncrasies. There are lots of common if not universal cultural oddities, such as the surprising popularity of 1970s reggae and Country and Western in bars and taxis, each country’s use of a local word meaning love and welcome, like the Hawaiian aloha, as well as rampant pollution by single-use plastics, sadly.

Where any particular cultural phenomenon is widespread but most most pronounced in one place, I have written about it in the review of that country. For example, wearing Hawaiian shirts and eating tuna poke in the Marshall Islands, enforcing stringent Christian mores in Kosrae, drinking the non-alcoholic but narcotic drink kava in Pohnpei, chewing and spitting betel nut in Yap , and eating spam in Guam. 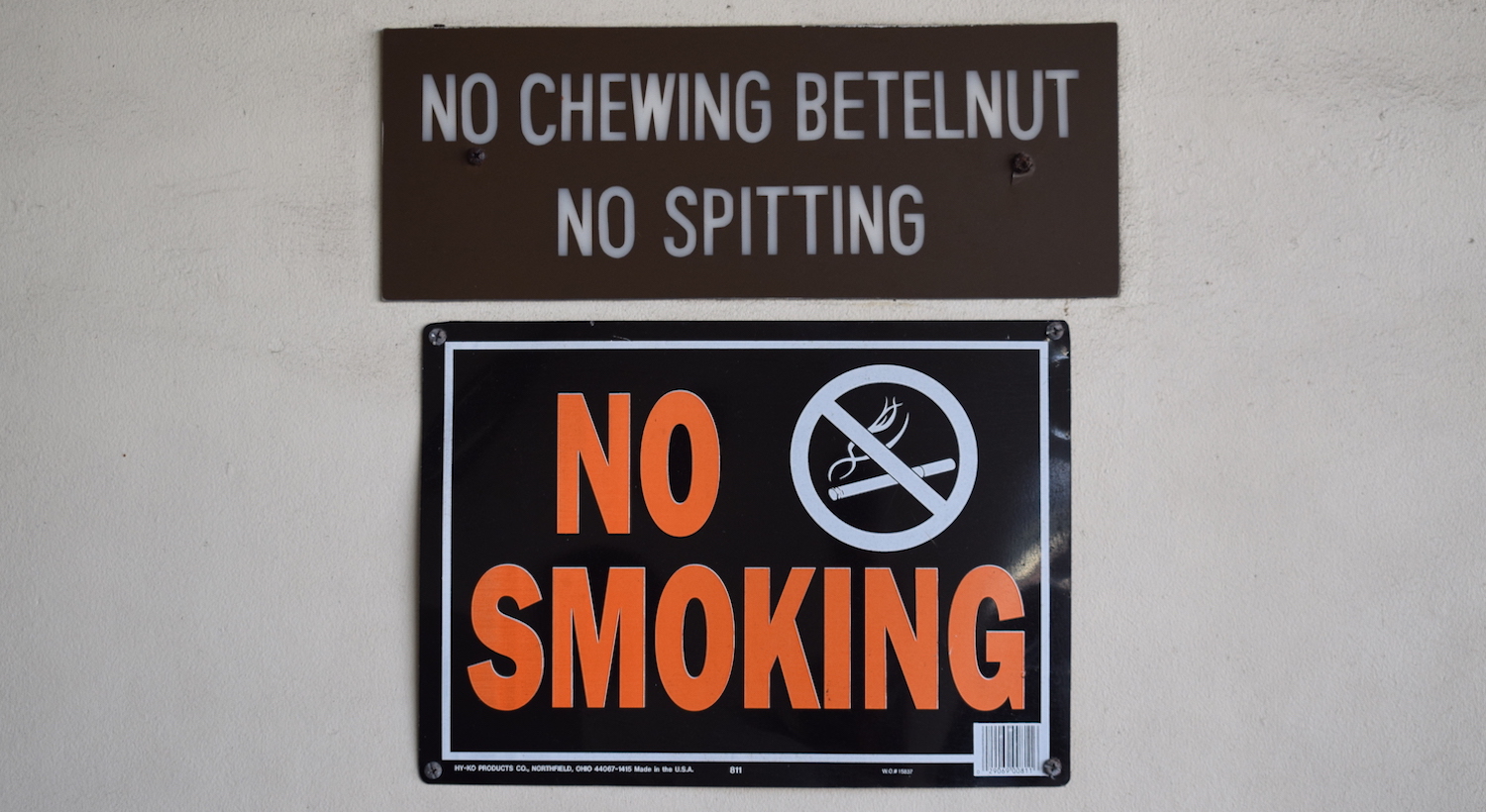 Micronesia is extremely isolated. There are no international mobile roaming agreements, few local TV stations, and very poor internet everywhere apart from the main hub of Guam so there is little connection to what is happening in the rest of the world. For example, we saw no European football shirts. When asked in the Marshall Islands where we came from, we replied as we always do “London”, and were surprised when we were then asked if that was in America. But then almost nobody back home seems to know where Micronesia is either.

It is after all very remote. It took about 30 hours of constant travelling to get home from Yap. There are rarely more than a couple of flights a week to even the biggest islands (apart from Guam), which presents the precious opportunity to scan bright blue skies and almost never be able to pick out an aeroplane with its vapour trail.

Getting here and getting around therefore requires considerable advanced planning. The best way is on a round-the-world ticket with the flexibility to change flights as you go along (essential to accommodate any changes caused by delays, which although we did not experience anything substantial are reputed to be common and sometimes last 24 hours or more). United Airlines has got Micronesia locked up so that is the place to start.

The easiest way to bounce across much of the region is on United Airlines Flight 154, the Pacific Ocean Island Hopper, which is legendary among plane geeks. It goes from Honolulu to Guam and back a couple of times a week; then you need to buy extension flights to Yap, Palau and the Northern Mariana Islands. These can all be added to the round-the-world ticket, though the restrictions mean you can only enter any one country a maximum of three times; to get to Pohnpei, Chuuk and Yap, the main stops in the Federated States of Micronesia, we therefore unfortunately had to miss the other destination there, Kosrae.

Every time we got back on board for the next leg, we were greeted by the same crew offering glasses of champagne. Most passengers are locals so we were almost alone in gawping at stunning atolls and islands along the way. (I mention in each country review the best side of the plane to sit for the finest views, but as a guide take a look at the Points Guy.)

These reviews contain quite a bit about logistics and practicalities, especially flights, as well as hotels and diving centres. I know from our experience that this is a more than usually tricky itinerary to put together so I hope to provide useful pointers. It can be hard work to organise, and you need patience to get around, but it is more than worth it to visit one of the most glorious places there is.

Outside the main dive destinations of Chuuk and Palau, and the urban beaches of Guam and Saipan, most of these places are just not expecting Western tourists; and indeed nor are they getting many. We encountered a few Americans – mostly Christian missionaries or military personnel on holiday – and a few Germans, but surprisingly no Australians and not one other Brit. Yet this is as good as it gets.

For reviews on each country, please see: